A torturer and his women 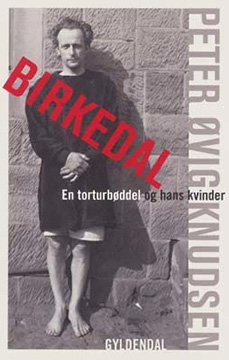 The front page photo shows Ib Birkedal, dressed in a so-called ‘anti-suicide jacket’, at an airbase in Germany a few days after his arrest in April 1947.

The story begins with a woman speaking of being condemned to 16 years’ prison even though she was completely innocent. But it turns out that after the Nazi occupation, Nina was sentenced together with the so-called Birkedal group.

During the Nazi occupation, the group’s leader, Ib Birkedal Hansen – a charming and gifted wholesaler’s son from Århus, was the highest placed Dane in the Gestapo and the Germans’ favourite torturer. He was not arrested until two years after the war and subsequently was condemned to death. During the trial a pertinacious psychiatric consultant looked deeply into the passionate relationships between Birkedal and his mistresses.

In 2004, Danmarks Radio awarded the Rosenkjær Prize to Peter Øvig for his two books about the Nazi Occupation: ‘Birkedal’ and ‘After the Killing’.

In the autumn of 2006, the author was awarded the ‘The Golden Bookmark’, when BG Bank’s Literary Advisory Forum selected ‘Birkedal’ as ‘The Book of the Season’.

‘Birkedal’ was also nominated for ‘Weekendavisen’s Literature Prize 2004’, ‘The Readers’ Book Prize 2004’ along with the award for ‘History Book of the year’.

Published in Danish only (Gyldendal, 2004)

“This is a blockbuster of a book. Perhaps one of the best of the many written about the heroes, rogues and twisted fates of the time of the Nazi occupation … It is a fantastic story in all its ghastliness, and on top of that it is well written. Read it and learn more, not just about the occupation but also about human beings in all their many facetted wretchedness.”

“Should you hesitate about finding the enthusiasm to read 557 pages about such a subject, you’ll find yourself hooked from the very first page. Øvig Knudsen is a brilliant journalistic narrator.”

“The book is a journalistic documentary, but written in the style of a novel with the sure hand of a master, which makes it difficult to lay down, not just because it is an excellent well-told story, but also because it raises questions which need urgent answers in our time too.”