Tales of the resistance fight’s liquidations 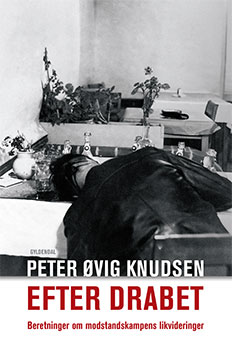 During the Nazi occupation, Danish resistance fighters liquidated some four hundred Danes who they believed to constitute a threat to the resistance movement. The liquidations have since become a subject of taboo and secrecy, which is why ‘After the Killing’ became a subject of much public debate when it was first published in the spring of 2001.

Since its publication, Peter Øvig has held lectures on the subject in libraries, gymnasiums etc throughout Denmark – in some cases together with resistance fighters themselves.

The second edition was supplemented by a postscript which, among other things, describes the many resistance people, relatives to fighters killed and eye witnesses who, having read the book, responded with many new stories and queries.

In 2003, together with Morten Henriksen, Peter Øvig directed the documentary film “Licensed to Kill, based on the book.

Published in Danish only (Gyldendal, 2001)

“Øvig Knudsen’s greatest achievement is that he knows by getting across an impression of the entire phenomenon’s multifaceted character and its deeply contradictory nature, how to break the silence without wagging his finger at anybody. He thereby raises all the questions which previously hadn’t been asked.”

“A richly documented work, a collection of tales which shock one out one’s complacency relative to the post-war romanticisation of the historical Danish reality 1940-45. With great skill and a noteworthy overview, the author tells some hair-raising stories.”

“It is a fine well-balanced book about a difficult and partly suppressed subject relating to recent Danish history. It is a work created by a supremely contemplative journalist, who seems to have the gift of getting people to talk about subjects which have largely been concealed.”

“A serious, sober and to a great extent highly readable book which is neither characterised by belated wisdom or armchair philosophy. The book is written with a deep respect for the resistance fighters who took on this dirty work.”